In this podcast episode, Jake Gilbreath and Brian Walters discuss common law marriages (also known as “informal marriages”) in the state of Texas. Listen in or read the transcript below as they discuss the legal requirements that have to be met in order to be considered informally married in Texas and their experience handling complex divorce and child custody cases involving these type of marriages. 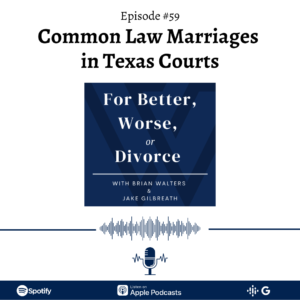