When your spouse makes and controls all the money in a marriage, it can be overwhelming to realize you are without the financial resources to get the legal representation you need. In this podcast episode, Jake Gilbreath and Brian Walters answer some of their clients’ most frequently asked questions regarding finances in a divorce and what happens in a temporary orders hearing in Texas. 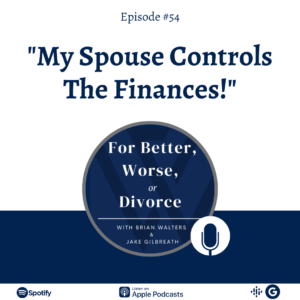