Thinking about hiring another law firm to handle your divorce or custody case? It is not uncommon for litigants to switch attorneys in the middle of their case. We estimate that almost half of our new clients hire us as a replacement for a prior attorney. In this episode of our family law and divorce podcast, Jake Gilbreath and Brian Walters discuss how to determine whether you should switch attorneys and what that process looks like. 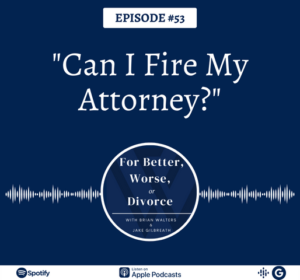